I have developed Painting with Light based on unique Leonardo da Vinci’s sfumato technique. This kind of painting is diametral to the usual painting. Image isn’t made by putting material on the surface but by alluring the light out of material.
It is a painting based on the ancient knowledge about the nature of light and the latest research in quantum physic.

About my research and creations, about light, illuminations

I paint in the manner of the old masters who called themselves ‘illuminators’, as they illuminated reality and wanted to bring light to people through a visual language. Clarity and light lead me in the path of understanding painting and, consequently, all other media, as well as life itself. Painting for me is not only the application of colour surfaces to the base but the research of a deeper understanding of life itself. To discover the unique technique of painting with light, I have studied and explored the fields of mythology and symbolism, psychology, philosophy, physics, quantum physics, mathematics, chemistry, various techniques and methods of human consciousness and perception. It was the desire to understand the connection between everything that existed that led me to Leonardo da Vinci.

“Painting is poetry that is seen rather than felt, and poetry is painting that is felt rather than seen.” ― Leonardo da Vinci

I studied the sfumato technique while I was a student, from 1994 to 2000, at the Academy of Fine Arts and Design in Ljubljana (ALUO). In 2009, after a ground-breaking event and after a nine-year interlude, I started to paint again, and in 2012, I painted ‘Contemporary Mona Lisa’. With this picture, my journey to the world of painting began, through the unknown dimensions of the discovery and rendering of reality. The works and notes of the great master da Vinci have always opened the door to new worlds and tell me the story behind them. I followed his way of exploring life – I began to look for the essence, the cause of the phenomenon, in every way. In each of my actions, I tried to understand what the hidden cause is that creates the world around us as it is. Leonardo always said that nature was his greatest teacher and spent most of his time observing nature and natural phenomena; he studied the flight of birds, watched the extremes in nature and in man, observed clouds, nebulae, mists and reflections of light; he studied painting techniques, and thus he tried to understand the appearance of the world and what is hidden in it. He wrote this: ‘It’s not enough to believe what you see. What you see, you have to understand, too.’ 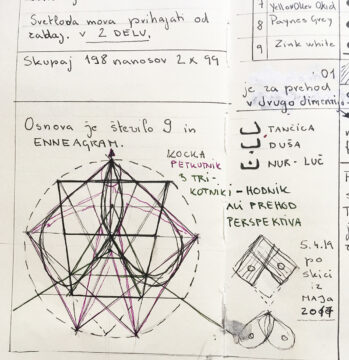 This kind of work meant a leap in my approach to creation, from which I realise that in spite of all the knowledge I gained during my studies and later from various theories, I do not know anything at all. There were questions and dilemmas for which I found no answers in books. I had to redefine my beliefs about what colour is, to discover what is a true visual language, and to become certain of the illusory value of the image, to understand the importance of mastering the technique and material and to develop the feeling of my body and hand in order to be able to create images that I saw in my visions.

The basis of my research was Leonardo’s painting method – sfumato, which in Italian means ‘smoke’ or ‘veil’. It is a technique of applying thin layers of paint, in which the materiality of the paint is completely lost, and the image of the form comes to life. After seven years of intensive work, observing Leonardo’s paintings and exploring his notes to understand what he was doing and how, I managed to paint a picture that reflects the vibrancy, softness and grace that pervades Leonardo’s paintings. I can claim now that I not only fully understand his process, but I also started to upgrade it.

The way of painting I have developed is unique throughout the world. Having acquired it in practice, I have constantly been checking in various theoretical areas. I learned that they wrote about it in the Vedic scripts, written by the alchemists, that this is the knowledge Pythagoras, Goethe, Tesla and many others had transmitted. I realised that reality is completely different from what I was convinced before. Leonardo Da Vinci’s work slowly and with certainty lead me, through observation and conscious presence, to a true understanding. Just as he wrote: ‘The brain is a fantastic organ; you only have to use it.’

Each image begins with the study of the relationship between content and composition. Relationships within the image between individual elements, diagonals, accents, empty spaces, … everything must be in a ratio that takes into account the primary language of geometry and numbers. It is not the same thing if the image is 70 cm wide or 66 cm wide. Such a difference may seem unimportant, but these few centimetres change the image’s feelings and, consequently, the understanding of the message. The basis is simple Pythagorean geometry. Behind all of this is a language of numbers. This is the most abstract language that a human knows and is ahead of any other communication. Numbers and geometry create the melody of an image that affects our senses and tells a story that is preliminary to an image. It is not just the golden ratio or the Fibonacci sequence that are important, but a form of science, which we call today the sacred geometry, which was common to all the ancient civilisations, whether it be shamanic knowledge of Siberia, the legacy of the civilisations of South America or ancient Egypt. The sacred geometry is the basis of all the artefacts that arose before the written word, from the times in which the basic language of recording the knowledge was still an image.

The next stage is the choice of colours and the way they are interchanged. I usually use combinations of seven basic tones – the colours I discovered during the study of old Babylonian records – which have survived to this day in the fragments of Plato’s and Goethe’s works and in some other medieval scripts from all over the world. My painting technique is painting with light, so it is especially important for me that the colours I use are of high quality and that the pigment is well grounded. I needed a little time to discover the medium that suits me. Since the colour and its vibration is essential, and I work with it at the level of the atomic structure, the paint tube is not only a white tube but always a specific shade of white, which has exactly fine particles of the pigment, a precisely determined binder and solvent content, and a specific drying time, which is different for each layer of paint. White is not only white, but every pigment is different, depending on the substance from which it is made, the age of pigment production and other factors. It depends on the medium, from the one that applies the colour. Colour becomes understandable only when perceived as vibration within the atom. Thus, titanium white is not the same as zinc white, because the titanium atom vibrates in the same vibration as the number five, and the zinc atom is at the level of nine. In addition, each image contains 60 to 200 thin paint coatings that intertwine each other and generate the final vibration. The colours I apply are carefully selected according to their primary vibration. Equally important is the sequence of colour tones.

After that comes the way of applying colours. It is different for each picture, as my movement affects the final message and the image’s sensing. Once I’ve fixed all this, I can start painting.

It’s only in the last two years that I started to understand how everything works together, which allows me to play with the essence – with the light and darkness and everything that exists between them. Leonardo da Vinci incorporated into his paintings his knowledge of the world surrounding us, anatomy, the laws of the occurrence of things, colour, composition, the way colour is applied and, most importantly, the relationship between light and darkness as a primordial duality which helps people to orient themselves in the world, get to know it and understand it. He did not use the elementary principle of duality only to achieve the reality of the image but spread it to all levels of his visual language. It is hidden in its method of applying colour, in the composition, in the choice of colours, in patterns on clothes, in the way he portrayed nature, and in the sensing of the depicted. It was only when I understood that his secret did I understand why people in his paintings feel so realistic while they simultaneously give a feeling as if they were coming from another world. First of all, this is the consequence of the sfumato, which makes everything seemed as if we are looking through veils of softness. This is because such a way of applying the colour particles to the surface actively cooperates with our eye and consequently encourages the visual centre in the brain to increase activity. It can be said that this method stimulates the natural functioning of our visible apparatus, as it keeps it in the game between the focus in the centre and the surrounding area that is blurred. It’s natural for our eyes, of course. Many painters used the same technique, and their paintings were infused with light, but not in the same manner. Their light is the earth’s light, the visible world of duality, while the images of Leonardo Da Vinci are wrapped in soft illumination.

“Light and darkness, brightness and obscurity, or if a more general expression is preferred, light and its absence, are necessary to the production of color… Color itself is a degree of darkness.” — Johann Wolfgang von Goethe

The truth about light

When I understood this, I could continue where Leonardo ended up. Just like him, I begin to create an image so that I first set up dark parts, and then I apply colours, and all the time I’m looking for the light inside them, and not outside them. Just like him, I am painting in the opposite direction than other painters. Instead of applying light or darker shades, generated by an external source of light, I draw their internal irradiation from the forms, their interior light. I paint by removing material from the surface and replacing it with light that lies within the atom. This is possible because of the understanding of the higher level of the appearance of matter and the vibration of the colour. What is the difference between these two principles of the colour coating? It is best understood through the principles of colour mixing. The first is of subtractive mixing of paint materials and second the additive mixing of coloured light. In the case of coloured substances, blending with red, blue and yellow is obtained in black. In contrast, the yellow and purple light are subtracted from each other so that we get white light. It may sound impossible, but if everything is only the result of light, then everything is light. Leonardo understood that at a certain level of life there are no colour substances. And just as he did, I am actually only cleaning the surface of my pictures, until I get the cleanest vibration – the original vibration. 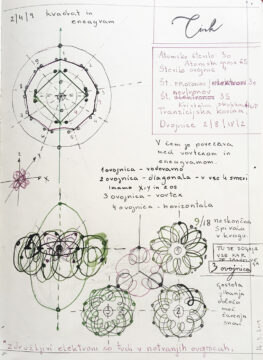